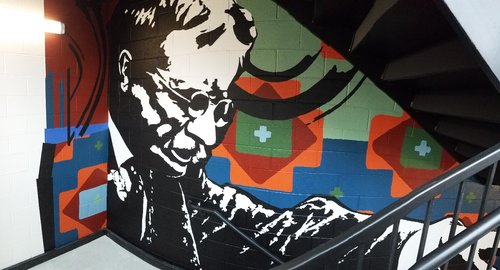 This month’s mural spotlight looks at the painting on the fifth floor of the stairwell. Muralist Matt Halm explains to us how former President Theodore Roosevelt inspired this painting.

Theodore Roosevelt visited Allentown on April 11, 1912 on a “whistle-stop” train tour and he spoke to a crowd of thousands. This image is inspired by a photograph taken of the former president at the Hotel Allen on 7th and Hamilton Streets. The architecture of 520 Lofts was inspired by the historic Hotel Allen. In this poster version of Roosevelt, the folds of his jacket sleeve create a mountain-scape as an ode to his creation of the National Parks system in the American West. Also, if you consider the geographic location, he is pointing to the spot of his speech in 1912 (west down Hamilton Street).

Have a section of the mural you'd like to see featured? Take a photo and tag @520lofts on Instagram and use #LiveCreatively520.